The Cathedral Museum boasts significant attestations and artwork from the diversified history of the diocese. Highly significant is the exceptionally collection of medieval liturgical textiles, which rates favourably among its European counterparts. The textiles include the Brandenburg Lenten veil, which was embroidered around 1290 and is the oldest embroidery of the textile collection. On a surface of approximately two by four metres it tells Christ’s life story. Numerous Gothic altar pictures and sculptures bear testimony to what was once a very opulent cathedral décor.

Since January 2003 the Cathedral Foundation has had its own textile restoration workshop. It was equipped with the latest equipment, enabling analyses to be performed whose results determine which restoration works are necessary and feasible for any individual museum object. 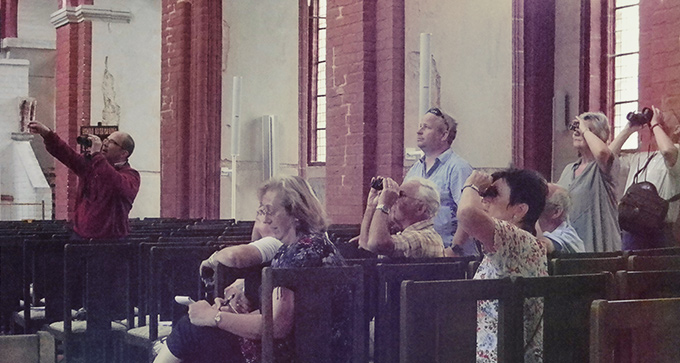 May we give you a personal tour?

Impressions from the Museum

In the 19th century canon Franz Bock from the German city of Aachen (also known as Aix-la-Chapelle) carefully collected sections of antique and medieval luxury textiles as models for his homemade silk manufacture. From the garbs from Brandenburg Cathedral’s collection he also took material and embroidery patterns. Later he sold his collection to newly opened arts and crafts museums throughout Europe. Consequently, parts of the Brandenburg garbs can today be found in Paris, London, Vienna, Berlin and Karlsruhe.